This is one of those times when name changing to protect the innocent is part of the game. This post is about something very embarrassing, a time when I victimized another child. You all know who I am but there is no reason to chance that you may know who he is.

Junior High School is a tough time for most kids. When you’re the third smallest on line in size order you have the disadvantage of being on everyone’s radar screen. I was near the front in elementary school and even though kids from other elementary schools were added in junior high I was still one of the smaller guys.

I was twelve. I think the size thing was part of what led me to single out Jack (remember, not his real name). I feel like I often picked on him, showing my mean streak. I also don’t think I was the only one, just the ringleader.

One afternoon as we got out of ’44’ on the 76th street side I was walking behind Jack toward Amsterdam Avenue being nasty and taunting him about something. Well, I got mine, he lashed out with a big swing turning as he swung and landed one right on my nose. Oh yeah, there was blood.

This turned the mean me into the monster me. I don’t recall how we got into that position but after a brief struggle I was on top straddling him and I had his head in my hands. I know too that I was about to bang his head on the sidewalk when I jumped up and ran off.

I ran to Rudley’s, the after school hangout, and was cleaned up and iced. Lots of good things happened at that soda fountain. Stranger In A Strange Land by Robert Heinlein was all the rage and we were sharing water and groking all the time. But this day something else was happening.

There was never such violence again. I did carry a knife for a while in junior high until my dad found out and gave me the lecture which included “what are you going to do when you pull out your knife and the other guy pulls out his and knows how to use it?” The blade which was very long and thin and folded was secured from Levy Brothers, the stationery store on the west side of Broadway between 83rd and 84th. (There are several stories from there which will follow at another time.)

Occasional stupid and dangerous pranks occurred in high school where I was still one of the little guys. There, I hung with the football team as a sort of mascot for protection. I was lucky here too, I never physically injured anyone.

Suffice it to say that during the teen years up until 16 or 17 I was not always the most pleasant of people.

Helen, housekeeper and maid later to be much more, arrived on my 3rd birthday in 1952. She would be many things to this son of a working mother over her 13 years in my parents’ employ.

I don’t recall our being much different from other households in this respect, although i believe her full-time status was somewhat unique because most families had stay at home moms so they hired cleaners and sometimes cooks.

In my earliest years my mother was confined at home with TB. I was the only negative TB test in the family which supports the theory that I was separated from my mother as an infant. This separation along with my being raised mostly by Helen explains much of who I became.

I believe that this is why fears of abandonment have often tortured me.

Through my youth my parents held a Passover seder for 40 in our west side apartment. Helen brought her sister along to help serve the grand meal which followed the service.

Helen and her sister were the only people of color in the apartment at the seder. Although I don’t believe my parents were anything but consistently liberal, I don’t think they traveled in circles where there were many people of color.

I didn’t know that she was different except in color. Her job was to clean and take care of me and she did that five days a week. Helen did watch her soaps every day. Search for Tomorrow and The Guiding Light. That was lunchtime too and she was not to be disturbed sitting in the living room, closer to the TV than my parents allowed me to sit.

There was a second bathroom behind the kitchen, it had a toilet and a bathtub. The latter was filled with stuff. Other than the stuff, the space, what little there was, belonged to Helen. It was where she changed and hung her street clothes.

She also understood my father’s taste for raw meat. She left for the day before dinner, leaving the meal to be cooked or heated by a parent. Chop meat (as we called it) and steak were always left on the drain board over the sink for my father and I to attack with fingers, knife and salt. No doubt this was the foundation for my heart disease

I remember, I was in the study where my father worked at home, doing something that I should not have been, cutting with his big scissors (pictured below) when I cut myself. It was a slice down the pad of my thumb. Not only did I injure myself seriously (lots of blood) but I shoved the scissors across the floor and shorted out a standing lamp. Seconds later I was running bleeding across the apartment to the kitchen and Helen for help and comfort. I feel like she was always there. 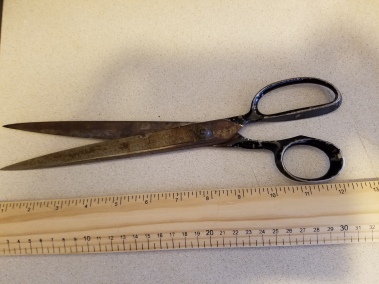 Helen left on my 16th birthday. I don’t remember much detail except for a sadness. She had taken care of me for 13 years, been my guardian angel and a mother.

It was not until years later that I understood that at the very least there was a dramatic class difference playing out that was tainted with race. I’m not sure how much that thinking was wishful on my part.

More than 20 years ago I tried to reconnect with Helen. I thought I had located her in a nursing facility and wrote to her. I was very disappointed that she or her family chose not to respond or perhaps she had already passed.

The people who help form you are always there. The west side was filled with them and also with so many things I didn’t understand as a child.