The John Jasper School, PS 9 Manhattan, was my daytime home for seven years, K-6. From where we stood at street level each morning there seemed to be six stories. We never discussed a basement, it would be too scary. We learned in the later grades, perhaps fifth, that the step like roofline was Dutch inspired and that PS9 was first built in the middle of a field. Very hard to believe now but at that age a most believable tale told by true authority figures, teachers. The first floor was the “gym”, it was also the place where some kids had breakfast and many had lunch. It was also the floor for the kindergarten kids. The floor was black with large white circles for games I don’t remember and columns I remember all too well, having run squarely into at least one while doing what children do, running without looking where I was going.

In every grade there was a special event celebrated at least by the IGC classes, those for Intellectually Gifted Children. We didn’t understand but this was a way of tracking a certain group of white children, mostly Jewish through the public school system. In later years I was surprised that my liberal parents didn’t object to tracking like this.

In fourth grade the special event was UN Day; the focus of many weeks of activity. The event would be held, of course, in the “gym”.

For years we had spent Halloween with the milk container wrapped in orange to “trick or treat for UNICEF”. That milk container was always the pint size, not to small and not too big. The wrapper, provided by UNICEF was very bright orange and bore the insignia of the United Nations. Today we would probably be calling it a logo. We were educated about the less fortunate children in the world and given the opportunity to have fun while raising funds to help them. I’m sure we raised plenty of change, I don’t recall dollars being stuffed into my milk carton.

Planning to Trick or Treat had us already involved with the UN and excitement about this celebration, the UN’s “birthday”, was evident. I was very interested in the UN, still interested in fact, and I was very ready to take a leading role in the event, a parade of nations. Thirty or more children would be decked out in all the costumes their parents could create to illustrate the culture or native dress of exotic places like Mexico, Brazil, France and the rest of the world. 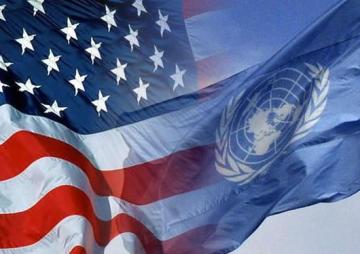 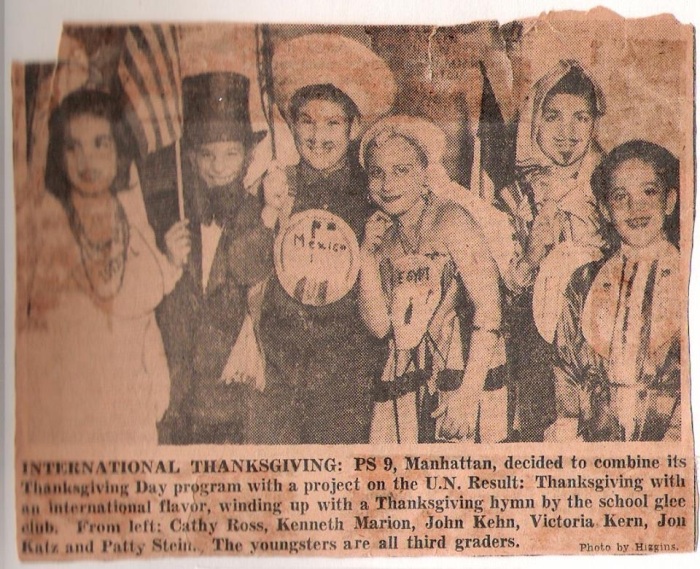 (The photo above says third graders.  I don’t think so but I’ve been wrong before and I’ll be wrong again.  Many, many thanks to Jon Katz for sharing this photo with me.)

One of my significant shortcomings was the temper tantrums for which I was well known. From the beginning of my school career I was difficult to manage when I didn’t get what I wanted. There were advantages to this horrid behavior through fourth grade.

In each grade I had friends because they got to go to the water fountain when I needed to cool off after acting out. I always got what I wanted. Today with social workers and psychologists available to every classroom, a child like me would have much more difficulty getting away with what I did; probably more likely he or she would wind up with a diagnosis.

Fourth grade was my biggest and most effective public school tantrum. Why, looking back, professional teachers gave in to this brat I don’t know.

The UN Day celebration parade of the member countries had many fewer than today. Each member of the class was to create a costume to march in the parade. I wanted to represent the United States, of course, but the US was assigned to one of my classmates, I don’t remember who, but I was going to have it and I won after a furious tantrum. Pulled into the room size coat closet with coats lining the walls, storage of all sorts above and a door that the teacher closed behind us, I came out Abe Lincoln.

Gathering the parts of the costume was a family event but I don’t think my parents ever knew how I got what I wanted. With beard and stove-pipe hat I marched at the very front waving the stars and stripes.

I am sure I was proud and happy but my tantrum approach did not work even once in after fourth grade.

I don’t know what the issue was but It was fifth grade when this tactic finally failed. Mrs. Burke laid down the law, “Kenny, the corner is over there,” she said pointing to the back of the room, “when you’re done you may go back to your seat.” Words I’ve never forgotten.