It was the spring of 1963, the second and last year of my tenure at William J. O’Shea Junior High School 44. It was lunchtime and the cafeteria was buzzing as usual. Never quiet, the very large space seemed to accommodate at least a third of the very large school population. Always rife with rumors – that boy and girl ‘together’, this one selling pornographic pictures, that teacher ‘this’ and that one ‘that’ – the cafeteria was the Facebook of our day.

The ‘SP’ kids pretty much stayed together; the 2-year program at two tables and the 3-year program at two neighboring tables. Boys and girls eyed each other and talked about who liked who and school gossip and homework assignments and upcoming tests. In the spring, regent’s exams were a big talking point.

I don’t know why but I was sitting alone at one end of a long table, away from my usual group, tray in front of me, with my lunch and milk spread out on my tray when Richie appeared directly opposite me. I remember him as a small guy, my size, he had dark hair and eyes and fairly dark skin as well. He had a brother I knew too. He was a hard kid, in one of those classes like 9-11 or higher for the kids no one seemed to care about and my peers pretty much feared.

Richie slipped into the seat on the other side of the table, took my milk, swigged it down and said something like “Did you hear about the stabbing in the school yard? I did it.”

Like other tough kids in the school, Richie had befriended me. I don’t know if I was scared or stupid or very clever but I accepted those relationships.

There was the captain of the marshal squad who declared another day that spring “senior day”. Any student, not a senior, wearing the school colors that morning (blue and white) was charged at by a posse that must have numbered at least a dozen. As I came through the gate on 77th street (pictured below as it is today) they came running straight for me. I was wearing a white shirt. They were yelling something that made the situation clear and I started shouting, “I’m a senior, I’m a senior”. That ended the assault I had been imagining before it began. 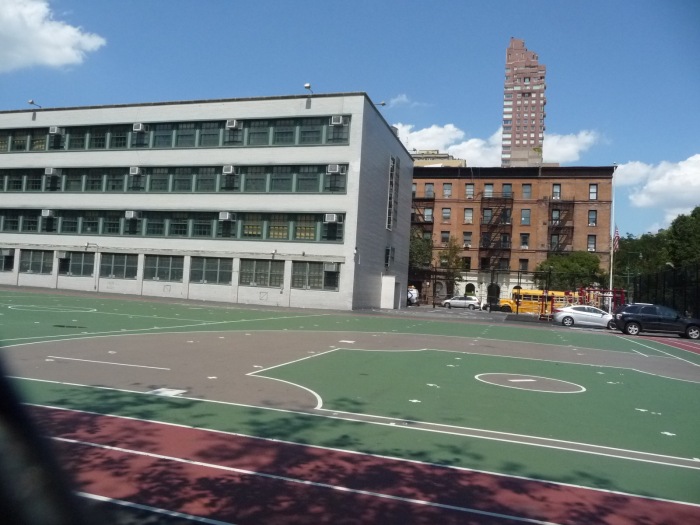 It was a tough school and we did some interesting things that probably weren’t funny to the victim at the time, but we thought they were.

One of the gym teachers, no name, no image, not terribly popular, drove a VW bug. He found it in the gym on the top floor one day. I recall getting a hand on a running board as it was lifted.