The building on the southeast corner of Broadway and 85th St, up on the second floor once housed the Sterling bowling lanes. The entrance was on the side street. The building still stands.  It was a place I spent many many hours having fun.

There are three events which stand out alongside the fact that there was a regular bowling date with friends like Jon (who will no doubt comment as he has done before).

One was a simple but unusual  bowling event which involved a professional bowler and his attempts at the infamous 7-10 split. For those of you who do not know bowling, the 7-10 split is when the only pins left standing are the two that are farthest apart at the end of the lane.

He was a young pro from the professional tour, or so we were told. They set a bench across the alley way down near the pins but far enough to keep him back a few steps. The pro stood just on the other side of the bench and tried repeatedly to make the 7-10 rolling his ball under the bench into that nefarious split. He never made it.

The second memory comes from a Saturday when I was bowling with one friend and we bowled three games each (well, that is what we planned).  I was so hot that morning that I bowled games two and three alone. 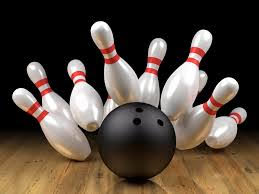 You have to understand that there was a high series trophy offered every week for three games, beginning each Saturday. Three successive games added together totaling more than anyone else who bowled Sterling that week. The Saturday morning in question I was amazing. I bowled 236, 215 and 201 giving me a total series score of 652.  It was entered in the book Saturday morning and there were no other entries that week. No one had a series higher than mine, so why make an entry  I was so proud of that accomplishment.  Never bowled anywhere near that well again.  The trophy is long gone.

The third event was the fire when Sterling went up in flames. It was a major, dangerous fire and I thought, a neighborhood catastrophe. We watched from the west side of Broadway as the fire grew. We knew that the heavily lacquered lanes would burn like crazy. And they did. What we didn’t know before that night was what happens when bowling balls are heated in an intense fire

Imagine our surprise when bowling balls started exploding through the roof.

That was the second fire in my lifetime at Sterling, and it brought bowling on that corner to an end.