One of the fixtures in family life on the upper west side is the Riverside, funeral home that is.  We have all been there, touched by the sadness and the formality and the dark suits and black hearses and limousines.

When my father died in 1970 I was not quite 21 and dealt with tragedy as a smart ass kid.  Riverside was the place to go and I went with my father’s cousin Richard (Dick) who was now the father figure.  Richard would later become my father-in-law but in 1970 he was cousin Richard.

The picture below is of the two of them as children in their world war one costumes.  It is a treasured family memento.

At Riverside we met with someone and then rode an elevator to the basement which housed the coffin displays.  On the elevator I recall asking the operator if I could drive; it was just like the one at 222 and I knew what to do.  He said no.

When we exited the elevator we were confronted with Riverside’s most expensive offerings.  Here again, the smart ass emerged and asked where are the cheaper ones?  We wended our way through several rooms and the boxes got less and less fancy and, of course, less expensive. 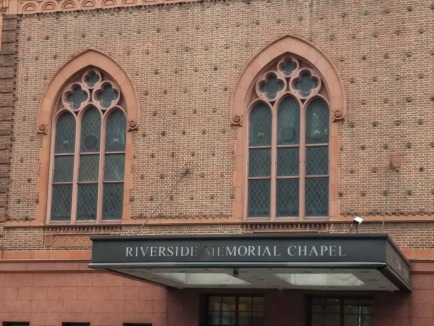 In the last room, in the back of the room, stood the plain pine box.  It is a Jewish tradition to go with the pine.  I could not do it.  My dad deserved better I thought.  Next up was a beautiful pine box with some curves and a Star of  David on the lid.  That was it.  Done.

Well, not quite.  Now there was the choosing of the room for the service.  Here, I was not a smart ass; I knew what I wanted, the biggest room they had.  Richard and the Riverside guy tried to talk me out of it.  It’s August they said, so many people out of town; a waste of money.  I insisted.

There was an obituary in the NYTimes, it was way too small for a man of such accomplishment but it was the NYTimes.

As was the custom, the attendees were in the chapel and the family, what there was, came in last.  At first, I was afraid to look but after we were seated I turned and found a standing room only crowd.  Heat of August be damned, vacation season be damned; my dad was honored and remembered by many.

As I wrote that last paragraph I teared up again, as I did then, and as I have whenever I think of that room and all those people who had come to remember who and what my dad had been.  The bad stuff was put aside. He was a good man, an accomplished man.

The Rabbi who officiated at his funeral was Ira Eisenstein.  He had performed the wedding of my parents.  In a manner of speaking the circle of life was completed when, many years later, Ira died in the hospital at which my sister was Chaplain.