I think I grew up in a period of New York history that was filled with parades.  There was Thanksgiving Day, Columbus Day, Veterans’ Day, and Memorial Day;  there were parades for winning teams and other heroes, like astronauts, as well.  These were celebrations. Some of them were glorious.

I remember going down to Riverside Drive to watch the parade to the Soldiers and Sailors Monument.  For those of you who don’t know, it was built as a memorial to those who died in defense of the Union in the Civil War.  Located on 89th and Riverside Drive, overlooking the Hudson River, it stands today as always.  Originally known as Decoration Day this became Memorial Day with time, and came to honor all who gave their lives in defense of our country.

This is different from Veterans’ Day, celebrated on 11/11 to mark the end of world war I on November 11th, 1918.  Over the years I have occasionally attended this parade to honor those who served in the armed forces of our nation both in my family and not.

Columbus Day has a parade.  I don’t know when it began to focus itself as an Italian heritage parade but that certainly brings less controversy in these days of questioning.

Thanksgiving is filled with parade memories.  Starting in the neighborhood with the balloon inflation outside the Museum of Natural History on 77th street and heading down Central Park West and then down to Macy’s (the proud long-term parade sponsor) this was the highlight of the parade year for children.

I have vivid memories of balloons and marching bands and santa followed by the sanitation men (they were all men in those days); it was quite a mess to clean up.

The balloon memories are vivid because mom’s boss had a colleague who had an apartment on the third floor of a Central Park West building at which was annually held a brunch/lunch event.  While the moms talked and managed the food and the dads watched Thanksgiving football, we all hung out the windows and watched the balloons fly by our noses.  This was a dream come true, year after year. 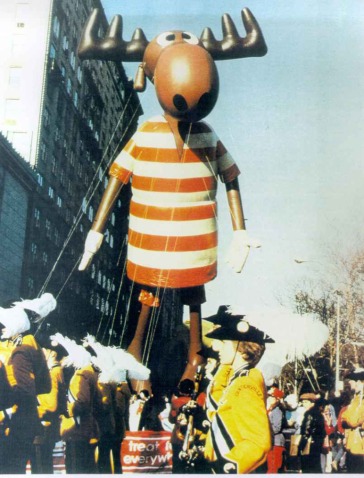 The other very West Side Thanksgiving memory occurred in the dining room of a brownstone between Columbus Avenue and Central Park West a few doors west of Rodeph Sholom.  Assembled here was a truly American grouping that included among others a part Cherokee woman, a Presbyterian minister, a children’s social worker, the family to whom the house belonged made up of a New Yorker and an Oklahoman, and, among others, me.

I baked a challah to add my Jewish touch.  It was carefully home-made dough, twisted into an 18-24 inch loaf covered in egg wash, of which I was very proud every year (the recipe came from The Jewish Catalogue and served me well in other settings as well).

The prayers at this table were ecumenical and the love and warmth of friends and family was evident thru the meal.  I still miss Joe and Cynthia, and Mommy Rae and Chuck and Dick and the rest of the family.

I’ve made new memories too.  For almost 20 years my family has joined other volunteers on Thanksgiving Day serving with Yes!Solutions on 125th Street.  The servers come in all sizes, shapes, ages, ethnic and religious origins, orientations and colors.  We join together to relive, again and again, the true American story – welcoming everyone to the table to share in our bounty.

I am a city boy; born and bred in Manhattan and schooled publicly, I could not be anything else.  I believe that early on I was expected to attend one of New York City’s exceptional high schools.

Me, I had a decision to make in the ’62-’63 school year, Stuyvesant or Bronx Science?  All boys or co-ed?   The test was the same, as it still is.  I chose Stuyvesant; not because of its academic excellence but because it was all boys.  I knew then that if I went to Bronx Science and there were girls in my classes I would not pay attention.  I think that was pretty insightful for one so young.

My three years at Stuyvesant were many things.

My social life in high school was incredible.  I believe this to be true because I had to work for it.  While Hunter girls were our cheerleaders and we had dances with the girls from Julia Richmond, it was hanging out after school with students of the Franklin School that yielded relationships.

The “brat” did reappear in high school.  I was too small to play football but made friends with team members.  This gave little me the protection I needed to do stupid and one time dangerous things to lower classmen.  This was the downside of the all boys school.

During the transit strike of 1965 when Michael Quinn was calling him Mayor Lindsley we had to find our way to school.  83rd Street and Broadway to 15th Street and First Avenue was not going to be easy.  But I had a friend, football player, a little older, drove a mustang convertible.  All I had to do was get to the East Side and Billy picked me.

High School was filled with adventures and things of which today I am not proud.  Most of the latter were because of the crazy culture of an all boys school and the difficulties between classes (seniors, juniors…)

There was the riot over a football game with DeWitt Clinton in which I took part.  That occurred on the day JFK was murdered.  A day never to be forgotten.

There was paying with pennies in the cafeteria to force the principal to let us go to the 1964 World’s Fair.

There was tripping younger students in the hall and being disrespectful to the young French teacher that resulted in her running from the classroom.

Who knows if I would have done better in the Bronx Science environment where I would be trying to impress the girls instead of the guys?