Summer camp, everybody went to summer camp.  We went to different places in different states but it surely felt like everybody left town for 8 weeks once school was over.  Kids from 222 went to camp in Connecticut, Pennsylvania and, I am sure, elsewhere.  Railway Express trucks picked up trunks all over the neighborhood in late June and returned before Labor Day.  Attending camp was both a right of passage and an example of middle class privilege.

I attended sleep away camp from just shy of 4 years of age until I was almost 12.  Cejwin Camps, billed as the largest Jewish camp in the US at the time was founded by mother’s uncle Al.

That first summer I was not there for the season.  My parents stayed on the peninsula in the middle of the man made lake on the Port Jervis campus.  The lake separated the “boys’ side” from the “girls’ side” with the peninsula jutting out in the middle. That spit of land was covered in bungalows and had its own beach.  Summer residents included family and friends of the founders and senior staff.  It also often was the summer rest stop for Rabbi Mordechai Kaplan fondly known around there as Modchi.

As I was so young, no doubt it was comforting to be able to see the peninsula’s beach from the Yonim beach knowing my parents were just across the water.

The camp or camps, because it was made up of seven different areas for the different genders and age groups, was Reconstructionist in its religious practice and philosophy; the reason no doubt that its founder Rabbi Kaplan was resident there during the summer.  On Saturdays, after services, everyone was in white.  The songs we sang at campfires were frequently Zionist in nature and I remember in arts and crafts doing a copper piece for Israel’s 10th anniversary (pictured below).  It stills hangs in my apartment. 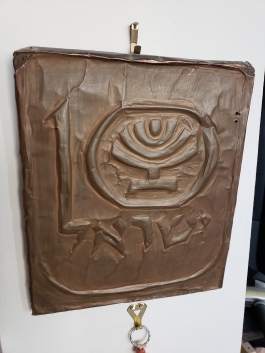 As I advanced from Yonim (for the little ones) to Hadar and then Carmel, I unfortunately recognized my status as great nephew of the founder and director and took advantage.  My temper, discussed previously, that of a spoiled brat insisting on getting his way, was frequently displayed at  camp.

When I ran away, they found me under the dining room.  I ate with the kitchen staff that night.

My last summer was in Carmel.  The “brat” was in full bloom when I pushed up the window screen and whacked the head counselor on the back of the head with my brush.

But that was not the end of camping for me.  I moved on to day camp.  Silver Birch Ranch Day Camp was in Yonkers.  It was up on a hill and we had horses.  We got to camp by bus each morning and at 16 going on 17 I became bus counselor.

The friends from Silver Birch were one of the two groups of young people at my Bar Mitzvah in 1962.  One of my clearest memories remains the congratulatory kiss I got from the beautiful counselor who was dating the horseback riding instructor who I worshipped and eventually worked with in my last year at camp before it was sold.

I was reminded not too long ago that my West Side comic book buddy Jon Katz (of katztales.com) was also at Silver Birch.

One summer when my mother went to Europe with her friend Florence and my father went to California for work I got to stay at camp in the home of the directors and their daughter.  They were wonderful people who took good care of campers and staff.

Many people come flooding back from those summers in Yonkers.  I did it backwards, sleep away camp and then day camp.  They are both long gone and each played a significant role in my life.