I was a New York City Auxiliary Police Officer. In the 1970s I wore a uniform identical to that of the NYPD officers except for the arching patch over the NYPD patch on my shoulder (it said AUXILIARY), the star shaped badge and the notable absence of a gun.

We were a little crazy; willing to patrol the streets of the 20th precinct with a nightstick and a radio for protection in an era of police shootings and random violence. We were a diverse group trying to do some good.

There are a lot more stories that I can’t remember. The cabbie is one that stands out because I had to act alone and was happy that, although never a Boy Scout, I was prepared. 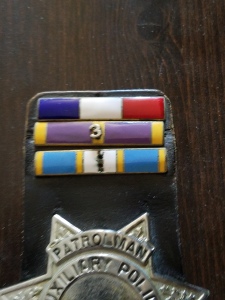 Crossing Broadway could be a challenge. I have always believed that because my mother jaywalked with the baby carriage I was a natural. The day in question did not require my crossing skills.

Standing on the corner of 80th and Broadway about mid day, directly behind a woman pushing a carriage I and other pedestrians were horrified to watch a weaving yellow cab run the red light and almost hit the carriage. Of course, he didn’t stop. He seemed intoxicated to me.

In those days I always carried my handcuffs, yup, in the middle of my back in a case. I gave chase on foot and caught up with the cab at traffic stopped for the red light on 81st. I bravely, but foolishly yanked open the driver’s door and cuffed him to his steering wheel. I think he was as dumbstruck as I so he didn’t take off. Uniformed patrol officers appeared and all was over.

We were not only a bit crazy, we were young and inexhaustible. There were several blackouts in the area, some more significant than others. As a uniformed auxiliary officer I was ordered to duty for one. That night we were called to a high-rise, newer and taller than most of the west side’s prewar buildings, to assist an ambulance call.

We surely assisted. First we climbed 14 or 15 flights and then we helped carry down an “aided case” the same number of flights. I got a ribbon for that night.

It’s funny that I do not remember the names of any of the auxiliaries I worked with in those days. We walked and talked for four hours on two or more nights a week, there were training meetings too, but I remember no one. Yes, I “retired” in late 1978 when I left the West Side, and that was almost 40 years ago.

4 thoughts on “The Cabbie”